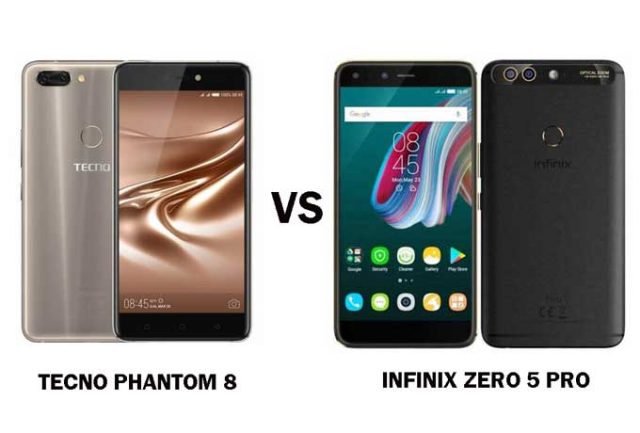 What is the difference between Tecno Phantom 8 and Infinix Zero 5 Pro. With the two mobile phones being released less than a month from each other, its only right that we compare the two devices. Just so you know, Tecno owns Infinix. “Haiya, sasa wacha tuendelee”. So here are the similarities between the Infinix Zero 5 and Tecno Phantom 8.

The two devices are strikingly similar, in terms of the outward appearance. In fact, in a quick glance, you can easily pass one for the other.

In the Zero 5 Pro, you get 5.98inches while the Phantom 8 has 5.7 inches. For those who like media consumption, the former is more suitable. The resolution is the same, however, the pixel density is slightly different since one is smaller than the other.

When it comes to weight, the Zero 5 Pro is heavier, coming in at 197 grams compared to the phantom 8 which is 167 grams.

Speaking of performance, in the Zero 5 Pro, you get an octa core processor. This is clocked at 2.6GHz. Similarly, in the Phantom, you get the same processor. The GPU of the two devices is also similar.

When it comes to multi-tasking, in both the two handhelds, you get 6GB RAM. Therefore, you can easily run multiple apps at the same time without crashes, lags and relaunches.

In terms of the camera, there is a major difference, but that is in the front facing selfie camera. In the rear camera, in both the Phantom 8 and Zero 5 Pro, you get a dual lens setup. The main one is 12 megapixels and the telephoto lens is 13 megapixels. They both comes with an LED Flash for taking photos in low light conditions.

In the front facing selfie camera, the Tecno Phantom 8 has 20 megapixels while the Infinix Zero 5 Pro has 16 megapixels. So, in this department, we see the first specification that really separates the two devices.

The Zero 5 has a larger battery when compared to the Phantom 8. You get 4350mAh compared to 3500mAh of the Tecno. In addition to that, both devices have fast charging capabilities.

Which should I Buy, the Infinix Zero 5 Pro or the Tecno Phantom 8

In my opinion, the Infinix Zero 5 phone is the better deal here. This is because you get more battery capacity compared to the Phantom 8. However, if you are a camera person, you should definitely go with the Phantom 8.

Now, if you look at the base model of the Infinix Device, it is almost 10k cheaper than the Tecno Phantom 8. This is because it is on sale for around KSh. 26,000 while the Phantom goes for around KSh. 36,000. These are the normal prices, however, we have links for you to by them at Jumia for reduced cost of purchase.

Take a look at Infinix Phone Prices in Kenya or see Prices of Tecno Phones in Kenya.