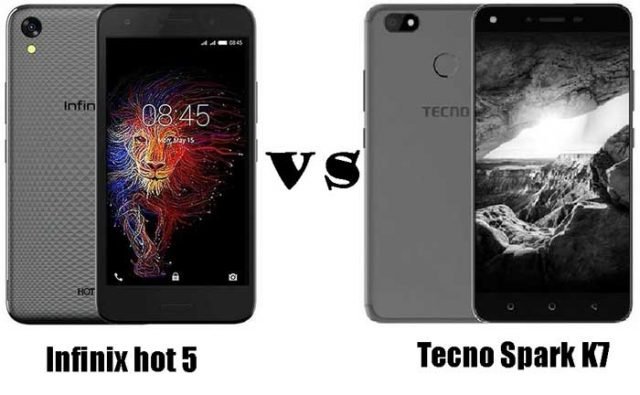 Here, we’ll be comparing phones, Tecno Spark K7 and Infinix Hot 5. Both mobile phones, were released in August of 2017.

when it comes to the design of the two devices, personal preference will play a major role in the choice you make. However, the Tecno Spark K7 is thinner. It measures 7.9mm while the Infinix Hot 5 is 8.35mm.

When it comes to performance of the two devices, both have exactly the same processor and GPU. Both quad core processors are clocked at 1.3GHz.

However, there is a major difference when it comes to the RAM. In the Tecno Spark K7, you’ll only get 1GB RAM while in the Infinix Hot 5, you get 2GB. Performance wise, the Infinix phone take a major leap here.

Storage wise, you’ll get 16GB in the two devices, with an option to expand the storage using a memory card. Both, support a maximum of 32GB microSD card.

Lets start with the rear primary cameras. While the Tecno comes with 13 megapixels, the Infinix has 8 megapixels. Both come with an LED Flash for taking photos in low light conditions. Other features common in the two cameras include geotagging, panorama and touch to focus. The Spark K7 is a winner in this department.

Now to the selfie camera. Both have 5 megapixels. However, the major difference here is the LED Flash. The Infinix Hot 5 comes with a front facing LED Flash while the Tecno Spark K7 does not.

So here, Infinix is a clear winner. However, in the overall ranking of the camera, the Tecno Spark K7 takes the lead since it comes with more megapixels at the rear. And generally, Tecno cameras are usually better compared to Infinix.

While the Tecno Spark K7 comes with only 3000mAh battery, the Infinix Hot 5 has 4000mAh battery. The Infinix smartphone is a clear winner here since it comes with 33 percent more capacity. This translates to better talk times and standby time.

Other common features include the fingerprint scanners, 4G LTE, Bluetooth and WIFI.

This conclusion will be divided into two sections, depending on the needs of different people. First, lets get pricing out of the way. The Spark is cheaper than the Hot 5..

First, if your major concern is the design of the phone and the camera quality, go for the Tecno Spark K7. The design is much better than that of the Infinix, in addition to having a better camera.

Now, if your concern is the battery and performance, definitely go with the Infinix Hot 5. Not only does it come with more battery capacity, but also twice as much RAM as the Tecno Spark K7.

Here is a side by side comparison of the specifications of the two devices:

We have listed prices for both Kenya and Nigeria. Find the below